A re-post from Light Words

Report From the Solar Eclipse Zone 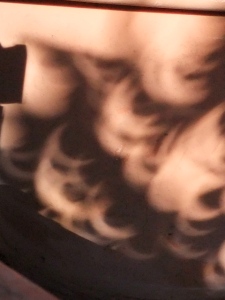 About 6:25 PST we must have looked pretty funny wearing our cardboard glasses running around the garden looking for shadows.

“Look there’s some!”  “over here”  “Wow they’re so clear” Came the calls. It was more like an egg hunting than sky

watching.  No one had a camera capable of capturing pictures of the partial eclipse that passed our way yesterday afternoon. So we took photos of the shadows to prove we saw the Moon pass between us and the Sun.

The excitement started at about 5:15 when we began seeing a tiny bite being taken out of the bottom of the sun. It is more like those marks some beetles leave when they chomp away on my rose leafs than a coyote eating the sun. It was oddly quiet even before it started.  A couple of jays began their evening dance and our friends cat came out to say his good night as the sky got darker and the sun began to disappear.

I was surprised to notice the shape of the crescent change from a C to a odd Cheshire cat smile as the eclipse progressed and the shadows were opposite the inverse shape of the sun, very curious!

We were not in a position to see the ring of fire but the sun disappear leaving a very tiny orange sliver. As soon as the sun was at it’s peak of eclipse and  began to become brighter a dog howled, and everything went back to normal. We became more chatty and began to concentrate on eating our Thai peanut chicken and corn on the cob while still  looking up occasionally to watch the Sun return to his former self.  Thank you Vern and Sheila for the good food and the rare and beautiful entertainment last night.

We are looking forward to the 2017 Total Eclipse in Oregon…See you all there!

A Storyteller, photographer, writer, teacher, mother, wife, gardener and at this moment a blogger. View all posts by Carol Carlisle

I would love to hear what you have to say. Cancel reply